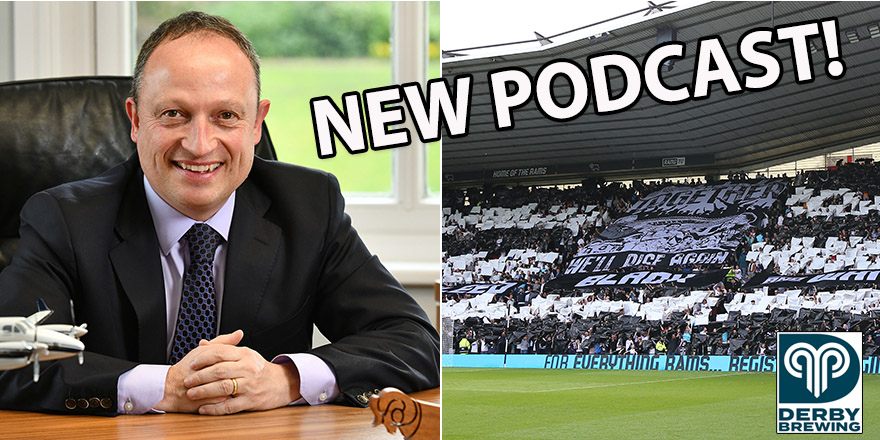 It’s over! After 285 days in administration, the Rams finally enter a new era as David Clowes’ successful takeover is confirmed. A jubilant SBW panel of Chris Parsons, Tom Martin, Jamie Page (@DerbyRetweets) and the Derby Telegraph’s Leigh Curtis celebrate the long-awaited news and discuss the club’s future under their ‘reluctant saviour’ new owner.

Is the job of permanent manager now Liam Rosenior’s to lose? And what’s the general mood ahead of the League One season, now our long term future has been secured?

The Rams’ new chapter will begin with a new manager – how will Wayne Rooney’s stint in charge be remembered? There’s also analysis on the rumoured incomings, including Connor Hourihane and James Chester… and the SBW panel have a few choice words for a certain Mr Kirchner.

What might’ve been….😩
We asked Craig Bryson if winning two trophies in Scotland was better than *that* hat-trick against Forest….
🥇 𝙋𝘼𝙏𝙍𝙀𝙊𝙉 𝙋𝙍𝙄𝙕𝙀 𝘿𝙍𝘼𝙒 🐏
WALLOP! 💥👏
Ice cold. 🥶🎯
Great effort, boys. 🖤🤍🐏 #dcfc
🗣️𝘾𝙧𝙖𝙞𝙜 𝘽𝙧𝙮𝙨𝙤𝙣: 𝙇𝙞𝙛𝙚 𝙖𝙛𝙩𝙚𝙧 𝙛𝙤𝙤𝙩𝙗𝙖𝙡𝙡
Another frustrating night… but great to see @louie_sibbo on the scoresheet. 🖤🤍🙌
'5 ⚽️
When the second penalty went wide.
Not in the script. 🤦‍♂️
🚨 NEW PATREON PODCAST 🚨
These are the away day moments we keep turning up for. 🙌
⛳️ Calling #dcfc golfers! ⛳️
NEW POD OUT NOW! What will Paul Warne bring to #dcfc? @chrisp274 and @lacutch are joined by Ollie from ‘Derby County Blog’ to assess the new gaffer. Out wherever you get your pods…! 🎧
What are your 5️⃣ word thoughts on Paul Warne being set to take over as Derby’s next manager?
Four away games, no wins… or even a goal. Worrying.
All the people from this historic #dcfc moment have now left us. RIP your Majesty.