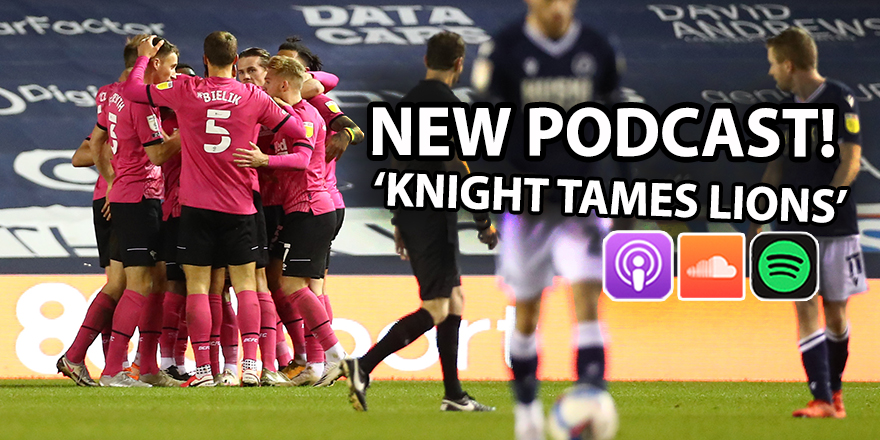 Derby have finally won again! After nine long weeks, Chris, Tom and Cutch are able to bask in the glory of three precious points, as Jason Knight’s second half goal proved enough to move the Rams off the bottom of the Championship.
There’s discussion too on the sickening scenes which saw Millwall fans boo players as they ‘took a knee’, we hail Colin Kazim-Richards as Derby’s unlikely leader, and ask… could Sam Allardyce really be Derby County’s new manager?

NEW POD OUT NOW!
The first league goal (and winner) of the David Clowes era! 🙌🐏 #dcfc
It’s new kit time… what do we think? #dcfc #dcfcfans #derbycounty
WIN THESE DCFC PRINTS!
🦅 JIM SMITH’S DERBY INNOVATORS 🦅
🚨 TAKEOVER PODCAST OUT NOW! 🚨
‘Lovely cushioned header… FOR CLOOOWWWEESS!’
IT’S OVER. 🎉🐏🙌
GOOD MORNING RAMS FANS! 🐏🇺🇸🐏🇺🇸
⚠️ NEW POD ⚠️
Loved doing a post-match pod in @derbybrewingtaphouse with a couple of our fantastic Patrons. We even had our own bunting!* #dcfc #dcfcfans
We’ll be back. 🐏❤️
Our last Championship away game for a while has offered hope for the future. Keeping today’s two goalscorers would be a massive plus after a brutal season. 💪 #dcfc #dcfcfans #derbyshire #efl #savederbycounty
We’ve achieved 52 points this season (currently enough for 17th) with a team of rejects, misfits, veterans and kids.
‘The ball’s loose… somebody leather it!’
WIN ALL THIS FOOD AND BOOZE!
🗣 𝗠𝘆 𝗠𝗮𝘁𝗰𝗵𝗱𝗮𝘆: 𝗧𝗵𝗲 𝗔𝗻𝗻𝗼𝘂𝗻𝗰𝗲𝗿
We stand with Ukraine. 🇺🇦