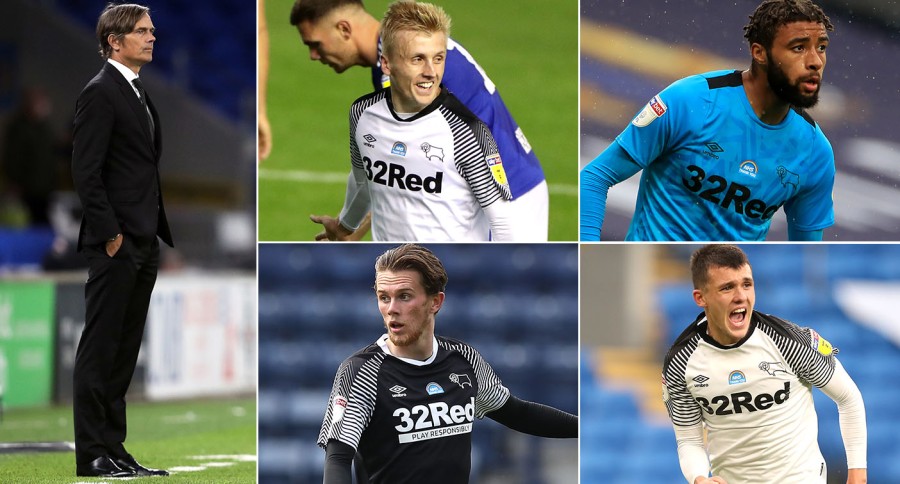 Robbie Jones compares Cocu’s crop to the last 20 years of Rams academy products. Have we ever had it this good…?

Derby’s disappointing defeat at West Brom in the 2019/20 run-in was not a result to live long in the memory. For the Derby County Academy however, it was a high point in the season. Nine academy players were in the matchday squad for the 2-0 defeat at the Hawthorns in July.

Louie Sibley (18) started alongside Jayden Bogle (20) and Max Bird (19) – the latter being handed the captain’s armband when Wayne Rooney was substituted in the final minutes. He’d go on to captain the Rams again before the season was out and has since won two Player of the Year awards.

From the bench, Jason Knight, Lee Buchanan and Morgan Whittaker (all 19) made appearances – as did Jordan Brown (19) and Jahmal Hector-Ingram (21) for their debuts. The only player not to feature was ‘veteran’ Max Lowe (23).

You could be forgiven for thinking this was the moment Derby County’s academy peaked in its success.

But what is success for a professional football academy? Players that breakthrough and play for the first team squad? The impact that players have on the team’s performance? Transfer fees obtained from selling talent? All three?

Certainly in the case of Derby, while their strategy has not always been central to the club’s objectives as it is now, success means a combination of all three.

Under Phillip Cocu, a coach renowned for developing youth at PSV, Derby have made significant strategic steps forward with immediate short term impact. Bird, Knight, Sibley, Whittaker and Buchanan have joined fellow academy graduates Bogle and Lowe in the first team. Brown and HectorI-Ingram also made the step up.

It’s been a pleasure seeing academy players get more action than just a substitute appearance with two minutes to go. Below, you will see the minutes played in the league by each academy graduate up until that watershed moment at West Brom. 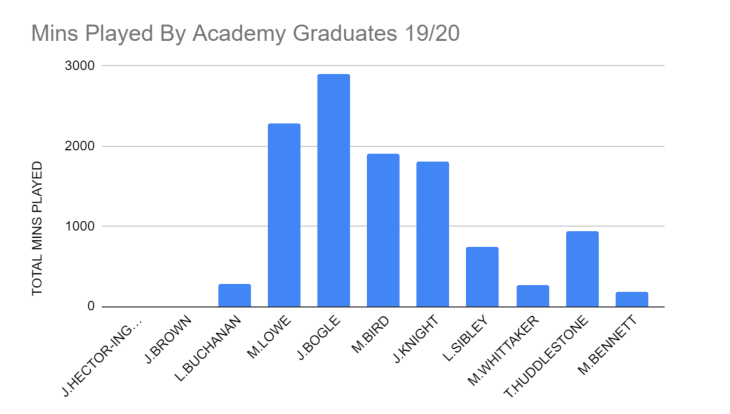  
To judge the trajectory of Cocu’s youth strategy, it’s important to look beyond the amount of players he has given a squad number too, and instead look at minutes played. Here you can see that players established within the squad last season under Lampard (Bogle and Bird) are continuing their increase in minutes played this season – a cornerstone of Cocu’s philosophy in developing players.

To get a better sense of Derby’s academy success, I’ve looked back through twenty years of data to see how many academy players featured each season, how many minutes they played – and how Cocu compares.

From the graph below, it is clear that Cocu is on a path to becoming one of the most academy-prolific managers the club has ever had. But he’s not there yet…

 
It is quite astounding to see how much ‘success’ Derby have had previously in blooding youth. Of the three big ‘humps’ in the graph before Cocu’s reign, they show the story of:

• 2002-2003 and with Derby struggling off-the-field and on it, under the guidance of John Gregory, the club were forced to throw young players in at the deep end. Adam Bolder, Ian Evatt and Steve Elliott made the most amount of minutes by academy players (excluding Chris Riggott who moved on during the season). Academy players in this season accounted for over 25% of the minutes played.

• 2004-2005 and a rejuvenated Derby side made the play-offs under George Burley, with smart player acquisitions and a strong emphasis on youth. Almost a third of the minutes played in this season were academy graduates, with Lee Camp, Tom Huddlestone and Adam Bolder (again) making the most appearances, along with Marcus Tudgay.

• 13/14 – 14/15 seasons under Nigel Clough and then Steve McClaren saw trio Jeff Hendrick, Will Hughes and Lee Grant play the majority of games over the two seasons. Both Hendrick and Hughes became symbolic of the free flowing attacking football Derby produced around this time.

If we judge academy success on minutes played, we can expect Derby to not only match but beat the high numbers from the previous two decades. (Slightly) unlike predecessors Gregory and Burley, Cocu’s hand isn’t forced when it comes to the players he plays. He doesn’t have to play them, he wants to play them – and that is a crucial distinction.

Over 20% of the minutes played this season will be by academy graduates, averaging over 1,000 minutes across 11 different players. The last time Derby featured more players than this was fifteen years ago in season 05/06, where ten players featured.

The club recently boasted themselves that Derby afforded more minutes to players under 21 (7,946) than any other Championship club.

However the data is sliced, Cocu has been quick to pick out the best and develop the talent already. There is no doubt the numbers of players and minutes played under his reign are only going to get higher.

It’s always going to be difficult to see how academy players can impact a team so dramatically. Who knows whether Marc Bridge-Wilkinson would have become a superstar in another team, or Will Hughes would simply fall by the wayside in a relegation-stricken team?

Regardless of this discrepancy, it’s still interesting to see how the team has fared with or without a high number of academy graduates. Twenty years has seen the club bounce between the Premier League and Championship, so to offer a fair reflection of each season, the success of the club in the graph below has been determined by the average points per game, in the league, across the whole season. The relegation seasons will stick out like a sore thumb.

Together with points per game, the graph also shows the percentage of minutes played by academy players, compared to non-academy players. This should prove, if there is a dream hypothesis, that the more academy players play, the better the team performs. 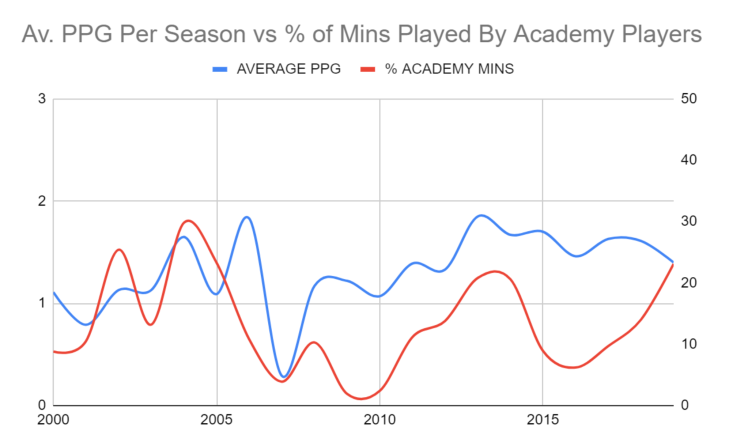  
On the face of it, the graph doesn’t show much. There is no clear correlation throughout the twenty years that proves academy success = club success. While George Burley used youth in 2004 to get into the play-offs, so did Billy Davies a couple of seasons later but with a vast reliance on footballers from outside the academy.

But sweep your eyes into the middle of the graph where the two lines correlate, almost perfectly. This, my fellow Rams fans, is the work of… Nigel Clough – of course. A steady increase in club performance was underpinned by more academy players playing.

Ever since a disappointing and hugely expensive 2016/2017 season where both points and % of academy players dropped for the first time in three years, Derby have always been on the mend. The work of Nigel Clough is only now being retrieved. Would one or two young names broken through if he’d continued for another two or three seasons?

Players alone aren’t enough to change the fortunes of a club, they need the right manager. If we didn’t know already, Nigel Clough and George Burley were the epitome of what Derby needed to realise their academy’s potential. Good football, experienced pros, academy talent and steady progress – these are the benchmarks of what this club’s manager should embrace, just like Cocu.

On the whole, we can say that collectively academy players do make a difference. The more you play them, the greater the chance of success. But as soon as that % of players goes over a certain number (50% of team minutes?) there’s going to be an opposite occurrence due to lack of experience, competition or a spark that a player from the ‘outside’ would bring.
Although Derby’s PPG plateaued during the run-in as a daunting fixture list took its toll, Cocu still simultaneously increased minutes for academy players. An amazing feat, so far.

Every Derby fan, I’m sure, wants to keep the top talent at the club for as long as possible. But we need to be pragmatic. Derby are a second division side, outside the Premier League for over ten years and making money on player transfers is what keeps the club afloat and competing.

On the flipside, clubs who do have their top talent cherry-picked by the big sides only benefit for so long. Southampton, who’ve endured years of academy players leaving for bigger and better things, managed three top eight finishes before seasons ending 16th and 17th. This year they ended up 11th… although they had mainly Danny Ings to thanks for hauling them out of trouble (Leicester 9-0, anyone?).

So although studying transfer fees give an indication of academy success, it does not reflect the whole picture. Financial woes, for example, can mean clubs sometimes need to make money quickly by selling on a prized youth asset.

Believe it or not, Derby have made over £107 million on player transfer fees in 20 years. An average of £5 million every summer that has been reinvested in other players or used to stave off debts for a little longer. The graph below shows the amounts taken and the contributions that academy players have had in this statistic.

Can you spot where Tom Huddlestone, Jeff Hendrick and Will Hughes were sold? Academy sales account for nearly 30% of the club’s received transfer fees – mainly down to this trio. Although not accounting for inflation over the period, it is a higher percentage than what even I would have guessed at the start of this research. Of course, most players have either moved on for free or had their contract terminated. In the case of Chris Riggott, he was ‘sold’ twice!

Taking these free transfers into consideration, Derby’s academy has produced players that average a profit of over £825,000. And that doesn’t include the sales of players that haven’t even made a first team appearance. Take Liam Delap. An academy player who switched to Man City in 2019 for a rumoured fee of around £1 million. (These aren’t included in the graph above).

Just like players, managers and owners come and go in short spaces of time, meaning it is difficult to attribute ‘success’ of academy players when it comes to transfer fees. Nigel Clough’s reign shows £0 money being raised from the sale of academy prospects, yet the two players he nurtured over his stay (Hendrick and Hughes) were sold on for tens of millions of pounds after he left.

If success was attributed to a manager on this basis, Nigel Clough would win hands down. As would American owners GSE, if we were to attribute the success of the owner who facilitated their development.

Put simply, Derby’s academy hasn’t hit the sweet spot just yet. It has flourished in producing a quantity of players in the early days that featured in the first team through necessity, and perhaps before they were even ready.

Likewise, the club has seen some team improvement with the injection of youth, and made a healthy amount of cash from a modest-sized group of young assets who’ve been sold on – but they’ve not been consistent in producing quality that raises funds and points every year.

Derby wants to embrace the ever-progressing, ever-coaching, ever-selling approach used so well by Dutch clubs, especially Ajax and PSV. When you start to delve into the stats of Cocu’s tenure as coach at the club, it’s evident why Derby wanted him now – for the sake of the club’s long term vision, academy strategy and financially sustainable future.

We’ve never had it so good have we? Technically yes, but the best is still to come.