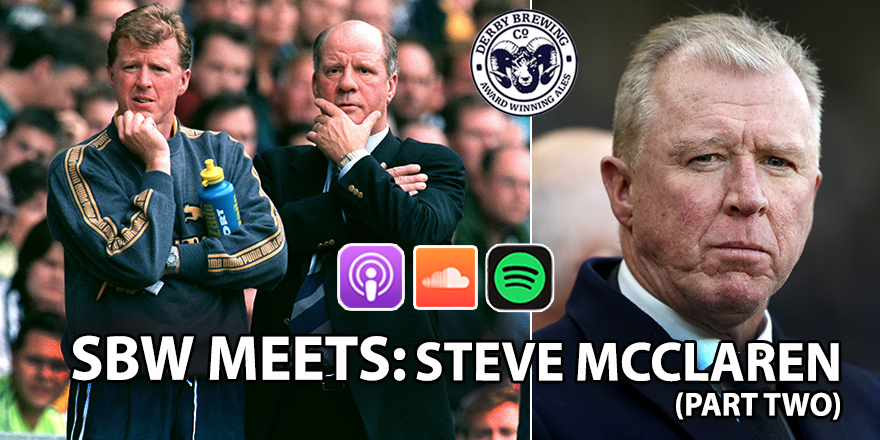 The second part of our extended conversation with Steve McClaren sees the former Rams boss explain why he felt ‘frustrated’ by his two managerial spells. McClaren also relived his stint as Jim Smith’s assistant in 1990s, told us what went wrong with the England job, how he found redemption in Holland… and what he makes of the current Derby set-up.
Steve Bloomer’s Washing · SBW Meets: Steve McClaren (Part 2)

He’s not an easy man to please, so you know you’ve done good when you get a hug off the gaffer...! Great to see @mwaghorn_9 scoring again. 🙌 #dcfc #dcfcfans #derbyshire #derbycounty
Richard Keogh returns to Derby tomorrow. We had @takesthatchance on our latest pod to tell us how he’s getting on.
🎙N E W P O D C A S T
ANDRE I COULD KISS YOUR BEAUTIFUL SHINY HEAD.
🏆 VOTE FOR US!
A blip... or how alarmed should we be by last night’s late capitulation at Rotherham?
We had some new artwork done. 😎🐏
📸 THROWBACK PIC: Jamie Ward celebrates in front of the away end at Watford during the 3-2 win in October 2013.
🗨️ 𝙄𝙉𝙏𝙀𝙍𝙑𝙄𝙀𝙒: @tommysmithofficial joined us on the pod to relive his eventful two-year spell at Pride Park. Out now wherever you get your podcasts!
𝘽𝙊𝙉𝙐𝙎 𝙋𝙊𝘿 𝙏𝙊𝙈𝙊𝙍𝙍𝙊𝙒
BACK! TO! BACK! WINS! 🙌🐏
Derby County Fantasy Five-A-Side!
🎶 ‘We all dream of a team of Kryssy B’s’ 🎶
🎤 NEW PODCAST: Our latest #dcfc pod is out now, with reaction to Rotherham, the latest tedious takeover wait, and chat on Richard Keogh and Duane Holmes. Listen in all the usual places!
This scene outside Pride Park feels quite apt right now.
Half way through the season and we’re still in the bottom three (on goal difference).
No midweek game this week... so instead, for no reason whatsoever, is a compilation of Derby's best goals scored off the post or crossbar. Enjoy! #dcfc
Darren Wassall when we beat Chorley on penalties on Saturday: