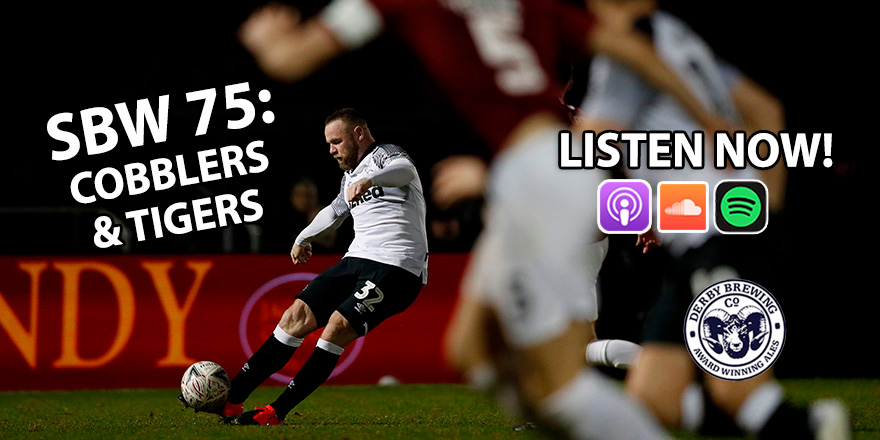 A truly woeful FA Cup tie against Northampton Town sees the Rams needing a replay to secure a fifth round spot… but they’re still in the hat. Chris, Tom and Anton pick the bones out of an uninspiring display against their League Two opposition, and also look back on the home win over Hull City.
There’s also some inevitable discussion of Derby’s EFL charge over FFP. a preview of the Rams’ trip to Luton, Goal of the Month, and a tribute to the departing George Thorne.

MASSIVE game tonight, so ICYMI, get in the mood with our most recent Rams podcast. There’s discussion on Erik Alonso and ofcourse... the relegation battle.
Delighted to announce that me and Tom went for a pint. It was cold but glorious. 🍻
Sum up this season in one picture...🤦‍♂️
It’s going to go down to the wire, isn’t it...?
Loving the tees and sweaters from @mrshaw75 and their ‘Hop Drop’ fashion collab with our pals at @derbybrewingco .
🗣INTERVIEW: BRANKO STRUPAR
Things to make #dcfc fans feel old: Mart Poom’s 22-year-old son Markus (born in Derby) now plays in midfield for the Estonia national team.
🎤 NEW PODCAST: John Percy joined us on the pod to discuss the #dcfc takeover... and he had some interesting information about the rival bidders to Erik Alonso.
📸 THROWBACK PIC: Derby fans at the Baseball Ground before a 2-1 Premiership win over Aston Villa in April 1997.
It’s been a tough season.
Prince Louie salvages our most unlikely point of the season! 👑🤷‍♂️😂
NEW EPISODE
It’s Jake Buxton’s birthday today so I’m blessing your feed with some original ‘Buckenbauer’ magic.
A disastrous night last night.
📸 Derby and Sunderland fans goad each other during a 1-0 Premiership home win in February 2001.
New wallpaper. 🙌💥🐏
He’s not an easy man to please, so you know you’ve done good when you get a hug off the gaffer...! Great to see @mwaghorn_9 scoring again. 🙌 #dcfc #dcfcfans #derbyshire #derbycounty
Richard Keogh returns to Derby tomorrow. We had @takesthatchance on our latest pod to tell us how he’s getting on.