One of Frank Lampard’s first Derby County changes saw a return to 4-3-3, with the Rams lining up in a variation of that shape for every pre-season fixture.

But which players will Lampard use in this system, and what are his other options? Ryan Burton studies the 4-3-3 variations and offers three possible line-ups for 18/19.

Designed to give both midfield control and variety in attack, this attack-minded shape could be ideal against a Reading side who were dismal in pre-season.

The key in this formation is the holding midfield role, where Lampard currently favours Joe Ledley (Tom Huddlestone reportedly has a groin issue). His position at the base of the triangle fills space between defence and midfield, giving Mason Mount and Craig Bryson freedom to push forward. With full-backs Max Lowe and Andre Wisdom overlapping on the flanks and both wingers, Harry Wilson and Tom Lawrence happy to cut inside, it’s an option which Derby fans know is full of goals.

David Nugent looks likely to start in the centre forward role and his desire to chase, drop deep and find space in the wide positions will see him play the most crucial role.

The veteran striker and crowd favourite may lead the line early on in Derby’s season, with Jack Marriott initially coming off the bench as Nugent usually fades badly after around an hour. Derby’s £5m man may start at Reading, ofcourse – but with Nugent having been favoured in pre-season, Lampard may prefer to phase his new signing in gradually.

– Easy on the eye, flexible and keeps opponents guessing. Wingers can swap sides or cut inside and roaming midfielders can drift wide or make runs to the edge of the area. Opposition can be outnumbered in the midfield areas. With the holding midfielder staying deep, you have two full-backs, two midfielders and three forwards in the opposition half that pose an attacking threat.

– Derby are no strangers to the shortcomings of this system, after seeing it unravel in both of Steve McClaren’s managerial spells. The most naturally attacking option, it can leave teams exploited at the back during quick transitions.

With full-backs encouraged to advance up the pitch and the natural high position of the wingers, a counter-attack can leave the team with just two centre backs and a defensive midfielder covering. The success of this system relies on the work rate of midfielders out of possession. The 4-1-2-3 requires a natural high line and a lot of tracking back.

A formation favoured by Gary Rowett for most of last season, 4-2-3-1 provides a more solid base and is was well-suited to away fixtures where Derby had less possession. Whilst not as fluid, it is still versatile.

With two CDMs (Ledley and Huddlestone as first choice, but George Evans or Bradley Johnson in this case), there is a more stability to this shape. Lawrence and Wilson are given freedom to play further up in their wide position, whilst Mount could take the attacking slot where Matej Vydra flourished.

Mount’s ‘No. 10’ position is pivotal here, as he can drop deeper to encourage the full backs to push on and wingers to drift inside, or simply link up with Nugent as Vydra did effectively at times in 17/18.

Once again, the central forward role requires work rate and clever movement to entice defenders out of position. This set-up appears made for either Nugent or Jack Marriott to lead the line, with Cameron Jerome potentially out of favour under Lampard.

Provides more balance between attack and defence. Has a solid defensive base and the attacking three behind the striker can swap positions as the game goes on. With two wingers comfortable on both flanks and an AMC happy to drop deep, Derby could yet embrace a less rigid 4-2-3-1.

Also requires hard work and discipline to succeed, especially from attacking players. The centre forward can be isolated in this role, especially in games when the team is under the cosh. With the attacking midfield three forced to drop deeper to help out defensively, this will leave the lone striker with the unenviable task of keeping possession long enough to bring team mates into play.

To some, a variation of the much-maligned 4-5-1. Also similar to a 4-3-3, at least when not in possession. However, with two attack minded box-to-box midfielders, it can be set up in a positive shape, in line with the fluid, attacking football Lampard appears keen to develop.

Once again, Ledley provides the shield in front of the back four, giving his midfielders the freedom to play with more attacking intent. Wilson and Lawrence are now effectively deployed as wide midfielders rather than wingers. 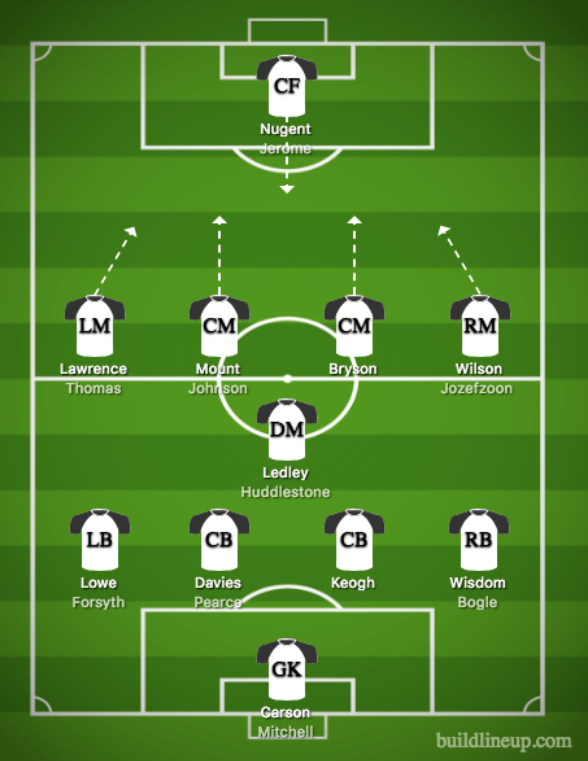 Whilst not ideal, this gives the midfield a more solid foundation, protects the full backs and is less susceptible to conceding on the counter attack.

With Mount and Bryson able to push forward more, Nugent gets more support – but he’ll need to drop deeper to instigate attacks. Arguably the most conservative approach out of the three (and least likely to be used) but certainly an option if Derby are looking to ‘shut up shop’ in difficult away games.

With extra bodies in the middle, a team that implements the 4-1-4-1 formation will have more of the ball. But can Derby pull off possession football again so soon after Gary Rowett’s tenure? Having more dedicated wide men would also mean more width, crosses and possible loose balls for the onrushing midfield two.

Huge responsibility on the holding midfielder without the ball. Huddlestone’s lack of mobility would not suit this formation, and thus Derby would lose his long range passing ability in attacking transitions. With one less CDM to provide cover, full backs also need to track wingers inside and could be overloaded by opposing full backs or attackers.