It can be easy to forget that there was a time before Frank Lampard and Chelsea. After breaking through the West Ham youth ranks back in 1995, Lampard was handed the arduous task of following on from his father, who had made over 550 appearances for the club.

Despite his time at Upton Park not yielding silverware, Lampard flourished in East London and helped the Hammers achieve their highest-ever Premier League position, a fifth place finish in 1999.

Despite earning his first England cap in 1999, Lampard had to wait until Euro 2004 for his first taste of a major international competition.

After being overlooked for the Euro 2000 and World Cup 2002 squads, he wasted no time in making his mark for the national side. 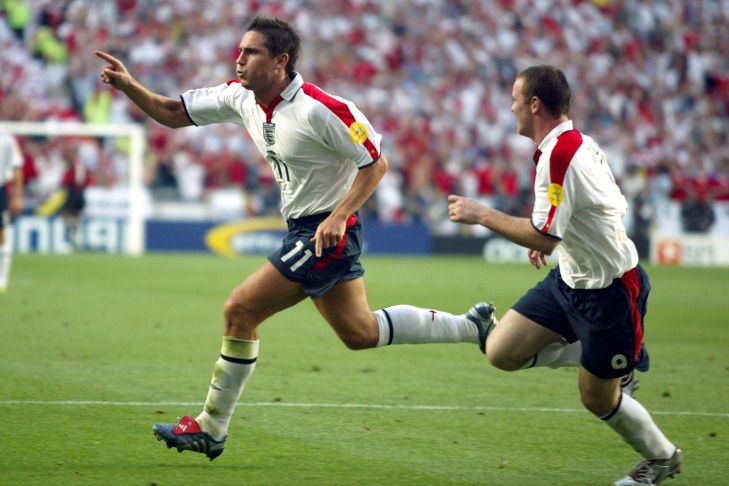 Scoring three goals in four games, including the equaliser in the quarter-final against Portugal, Lampard announced himself on the international stage and was named in the team of the tournament.

In a breakout season where Chelsea broke records left, right and centre under José Mourinho, Lampard played a crucial role in Chelsea’s title in 50 years.

Lampard contributed 13 goals and 16 assists, including both goals in a 2-0 win at Bolton Wanderers to secure the first of his three Premier League titles.

The following season, he would repeat the feat of scoring in the title-winning fixture at the same stadium.

After earning his first silverware with Chelsea and being voted the Premier League Player of the Season, Lampard had already established himself in the top bracket of domestic midfielders.

But his achievements did not go unnoticed on the world stage either. After being selected as a member of the inaugural World XI, he finished runner-up to Ronaldinho in the Ballon D’Or & Fifa World Player of the Year awards.

Whilst Lampard was renowned as a box-to-box midfielder who had mastered the art of late attacking runs, that wasn’t all he had in his locker as a player.

He displayed his goalscoring dexterity on one of the grandest stages of all, at Barcelona’s Nou Camp on a Champions League night.

After initially miscontrolling a pass from Claude Makelele, he was driven wide of goal and tight to the touchline, but somehow manage to curl a chipped shot over Victor Valdes inside his back post.

In 2009, he scored the winner in a 2-1 victory over Everton in the FA Cup final. Despite being 1-0 down after just 25 seconds, Lampard helped inspire a rousing Chelsea fightback at Wembley.

Quite simply Lampard’s most prestigious accolade, as he helped secure Chelsea’s first-ever European Cup. Lampard captained the side in the absence of John Terry and inspired a dramatic victory over Bayern Munich on penalties.

This success would’ve been extra special for Lampard, who scored in the 2008 Champions League final against Manchester United, only to lose out on penalties.

On the way to the final, Lampard scored a crucial penalty that helped Chelsea overturn a two-goal deficit in the second leg of their last 16 tie against Napoli.

Joining the likes of Bobby Moore, Bobby Charlton and Peter Shilton, the midfielder achieved this extraordinary feat in a World Cup qualifier against Ukraine.

He would go on to reach 106 international appearances and finish as England’s highest scoring midfielder, with 29 goals, before announcing his retirement in 2014.

May 12th 2013, the day Lampard stamped his name into Chelsea’s history, as he became the club’s all-time leading goalscorer.

Lampard’s brace against Aston Villa meant he surpassed Bobby Tambling’s 202-goal haul. He would finish with a total of 211.

After scoring ten or more Premier League goals in ten consecutive seasons as well as being the Premier League’s highest scoring midfielder with 177 strikes, it’s no wonder many regard him as the best midfielder of his generation.

MASSIVE game tonight, so ICYMI, get in the mood with our most recent Rams podcast. There’s discussion on Erik Alonso and ofcourse... the relegation battle.
Delighted to announce that me and Tom went for a pint. It was cold but glorious. 🍻
Sum up this season in one picture...🤦‍♂️
It’s going to go down to the wire, isn’t it...?
Loving the tees and sweaters from @mrshaw75 and their ‘Hop Drop’ fashion collab with our pals at @derbybrewingco .
🗣INTERVIEW: BRANKO STRUPAR
Things to make #dcfc fans feel old: Mart Poom’s 22-year-old son Markus (born in Derby) now plays in midfield for the Estonia national team.
🎤 NEW PODCAST: John Percy joined us on the pod to discuss the #dcfc takeover... and he had some interesting information about the rival bidders to Erik Alonso.
📸 THROWBACK PIC: Derby fans at the Baseball Ground before a 2-1 Premiership win over Aston Villa in April 1997.
It’s been a tough season.
Prince Louie salvages our most unlikely point of the season! 👑🤷‍♂️😂
NEW EPISODE
It’s Jake Buxton’s birthday today so I’m blessing your feed with some original ‘Buckenbauer’ magic.
A disastrous night last night.
📸 Derby and Sunderland fans goad each other during a 1-0 Premiership home win in February 2001.
New wallpaper. 🙌💥🐏
He’s not an easy man to please, so you know you’ve done good when you get a hug off the gaffer...! Great to see @mwaghorn_9 scoring again. 🙌 #dcfc #dcfcfans #derbyshire #derbycounty
Richard Keogh returns to Derby tomorrow. We had @takesthatchance on our latest pod to tell us how he’s getting on.